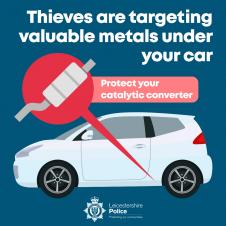 Leicestershire Police is encouraging vehicle owners to be extra vigilant due to a rise in catalytic converter thefts from cars.

Thieves are targeting vehicles for the parts due to the value of the precious metals they contain, as precious metal prices go up the demand for parts that contain them goes up too, resulting in the risk of theft increasing.

The process of stealing a catalytic converter can be carried out in as little as 60 seconds with high power tools.

Increase of catalytic converter thefts began in late 2018, however, during the pandemic of this year the numbers seemed to have dwindled. But now, they have risen again.

Now Leicestershire Police has launched a campaign to make drivers aware of the issue after a number of incidents across the force area.

The force will be will be installing bold warning signs in hotspot locations to warn drivers, will be promoting how to reduce the risk of being targeted on social media channels and via Neighbourhood Link and is working with a number of garages to offer free security marking for catalytic convertors.

The theft of catalytic converters can happen anytime day or night via typical locations such as:

Thieves cut the catalytic converter from the exhaust pipe of a parked car and sell them on for profit.

Taller vehicles (4x4s) are particularly vulnerable as the converters are more accessible and because they tend to have larger engines, contain more of the precious metals.

Detective Chief Inspector Reme Gibson said: "We have seen a rise in catalytic converter thefts around the force area. Predominantly, these crimes tend to occur in supermarket car parks and private driveways.

"Any vehicle can be subject to catalytic converter theft, however Toyota Auris, Toyota Prius, Honda Jazz and Honda Accord are known to be more vulnerable to this type of theft. We urge vehicle owners to take measures when parking and reduce the risk of theft."

To reduce the risk of theft of your car's catalytic converter:

The force is seeking to work with more garages as the campaign progresses.

Face masks MUST be worn when entering the office please.